In this blog, I will talk much about planting seeds and holding the visualization of that seed’s growth until it manifests.

An example of this in my life is represented in the journal entry reproduced below, originally posted on September 23, 2008, over 3 years ago.

It may not seem like much, but the seed planted which resulted in the following post, written over 3 years ago, has now become manifest and a goal achieved in my life.

As mentioned in an earlier post, I now rely exclusively on the bicycle for transportation. This has been a great joy and freedom and something which I regard as an accomplishment in my life. What then seemed like perhaps an impractical proposal has now become reality and, oddly enough, worked out exactly as I wrote, 3 years ago, that it would.

I mention this as a small example demonstrating that if one plants a seed, no matter what that is, no matter how great or small, and tends it carefully with the right visualization and determination, it can manifest. And it’s not that this is such a fantastic example of what can be done, but that’s not really the point. For me, overcoming the “car addiction” and getting up yet another hour earlier in the morning in order to do it as well as working out some of the other hidden challenges attached was an achievenment. After all, how many people would give up their car or would even want to. So it’s not so much necessarily the size of the achievement that matters, but the achievement in and of itself, and that can be anything, from giving up Big Macs to giving up added salt, or anything else that you’ve been wanting to do.

Don’t listen to others telling you that you have to do it this way or that, or at this pace or that. Take it in your own way, in your own time.

I am feeling the urge to stop driving the car. Many of the streets here have bike lanes, I have a $3000 bicycle and I know how to ride it. I’ve been cycling seriously for the past 25 years and was a runner 8 years before that. Lately, I’ve been riding 25 to 30 miles 6 to 7 days a week. In all the 25 years, however, I’ve not used a bicycle to commute.

There are challenges with cycling as a mode of transport here none of which have to do with the actual riding itself. These issues have to do with the nature of my job and location, which I won’t go into at the moment. Whether or not it will be feasible to entirely give up the car will remain to be seen. These challenges, are for the most part, safety issues because of city living and what that brings, but there are other challenges as well, but it is something that I have been giving much thought to and have been gearing myself for.

I’m not a particularly ambitious person per se. I don’t get an idea and then necessarily go head long into battle with it. I more or less get certain ideas and inspirations and visualize these allowing those concepts to imbue me until they manifest. At times, these manifestations have happened rather suddenly; at other times, it has been a more gradual process. For instance, I told my mother when I was 9 years old that I was going to be a fruitarian; however, a raw plant based regime didn’t become a reality until many years later.

It has always been rather strange to think of a thing and then at some point be engaged in the actual reality of that thing as it unfolds.

Often I think that I should be more ambitious. In my life, ambition has always been difficult to come by. I have always been far more enthusiastic about marked inner development. I can only attribute this temperament to the lives spent as a monk.

Since, writing that over 3 years ago, I’ve solved any of the concerns that I had with logistics. I was correct to have safety concerns in commuting, having been involved in a bicycle accident with a car just 4 weeks ago. However, I’m happy to say that I’m back on the bicycle and it’s business as usual. 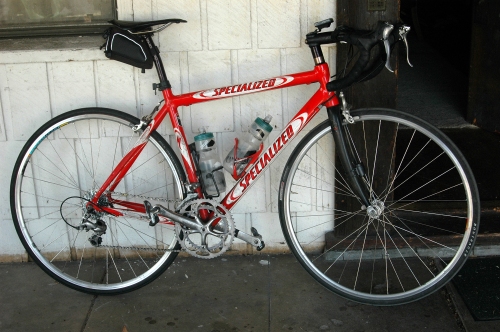 It’s become much more than a beautiful exercise machine in these past few years. I still use it for that regularly but I’ve also been using it more and more to commute. And it is a joy! Granted, it’s more work; I have to leave earlier, get up earlier, sometimes a lot earlier, but that’s all part of the joy. Because nothing comes from nothing. Nothing can be gotten for nothing. Everything has to be worked for in life, especially freedom. That is obvious. And this is a great freedom. I don’t have to elaborate on that surely. Just think of all benefits of not having to rely on a car and what freedom it would be to not have to depend on that, having your vehicle be a machine that rides very fast, how fast depending on your own strength both physical and mental which only improve with practice, that you can pick up with one hand and store in your living room, there’s a certain novelty to that, uses no fossil fuels and increases your well being and fitness to boot.

Yeah, this is a no brainer!

So gradually, I’ve been riding the bike more and more and driving less and less. I still haven’t entirely given up the 3000 pound hunk of inefficiency, but that has been the goal and that goal is gradually becoming reality. The big obstacle for me had been making the mental resolution to get up at 5:30am and head out into the dark brisk air at that time in the morning when I “should” be sleeping. But that’s just getting the feet wet. Once you’re heading down that street at 20mph and rolling under your own power and the ingenuity of your bike’s beautiful design, it’s all the more joy that you overcame that obstacle, that limitation. Limitations and obstacles are in the head. We overcome them all in the mind. And every time that we do is a step forward; we become that bit stronger and it is yet another “victory through experience”.

Tomorrow, I will cycle to work and back for a round trip of 60 miles. I’ve been doing that on Saturdays for the past three years. I’ll be bringing my beautiful BOB trailer as well because on the way back, I will stop at Tapia Brothers farm in Encino, CA for two flats of vine ripened tomatoes. These are some of the best farm fresh tomatoes that I’ve ever eaten, and here in Southern California, tomato pickin’ season goes until Thanksgiving. I’ll be sure to keep you posted on that.

And if all this wasn’t inspiration enough for you to get peddlin’, check out my friend, Harley’s blog for tips on cycling, diet, lifestyle and health. Here’s a man who at the age of 34 has never owned a motorized vehicle, never even had a driver’s license and has gotten around exclusively on the bike. Now there’s an inspiration for you. He’s one of the fittest and best riders that I know. If anybody is the cycling commuting hero, that’d be Harley.

See you on the road.